This solar simulator was designed to produce highly collimated light and was developed to operate inside a vacuum chamber.


A researcher from a renowned space agency approached Sciencetech to custom-design a high-powered, collimated solar simulator capable of being placed within a vacuum chamber. The solar simulator was to be a part of a larger system designed to simulate extra-terrestrial environments in a controlled laboratory.


Ideation and
Designing the System


Numerous ray tracing models were developed to assess the optical characteristics of the proposed solar simulator design. After several iterations, a suitable optical design was proposed to achieve the required specifications. 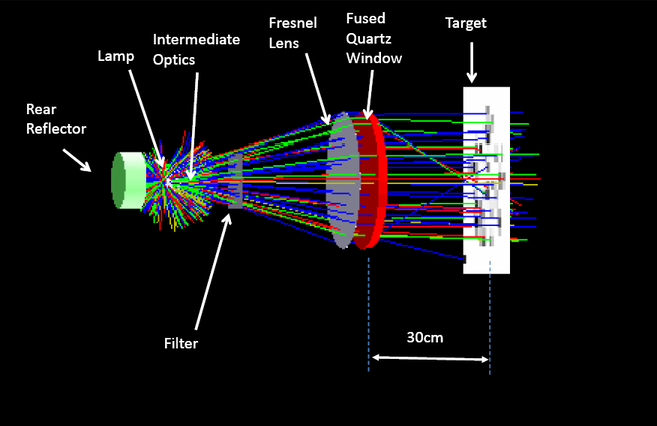 At the heart of the system, a 2.5 kW xenon arc lamp was used to collect the light with a lamp house containing a spherical back reflector. The collimation angle was achieved with an intricate optical assembly that contained a Fresnel lens system.


The collimation angle of the simulated light rays was determined by measuring the amount of optical power passed through apertures of varying sizes placed at the focal plane of a mirror.

The tests were conducted when the light emerging from the solar simulator was reflected at 45° off of a very thin quartz plate ( with 4% surface reflection). Light reflected from the quartz plate was retro-reflected by an aluminum coated spherical mirror with a known focal length. Apertures with sizes from 1.5 mm to 15 mm were placed at the focal plane of the spherical mirror and the optical power emerging through the apertures were measured with a NIST traceable silicon detector. 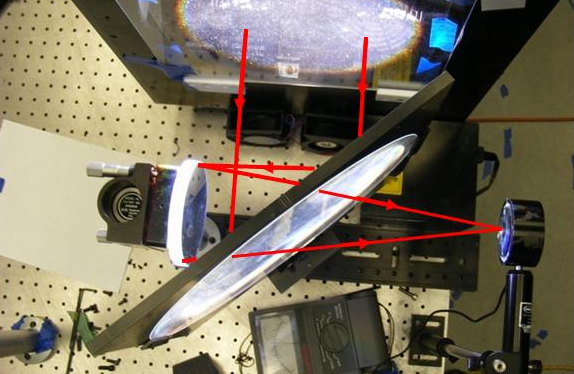 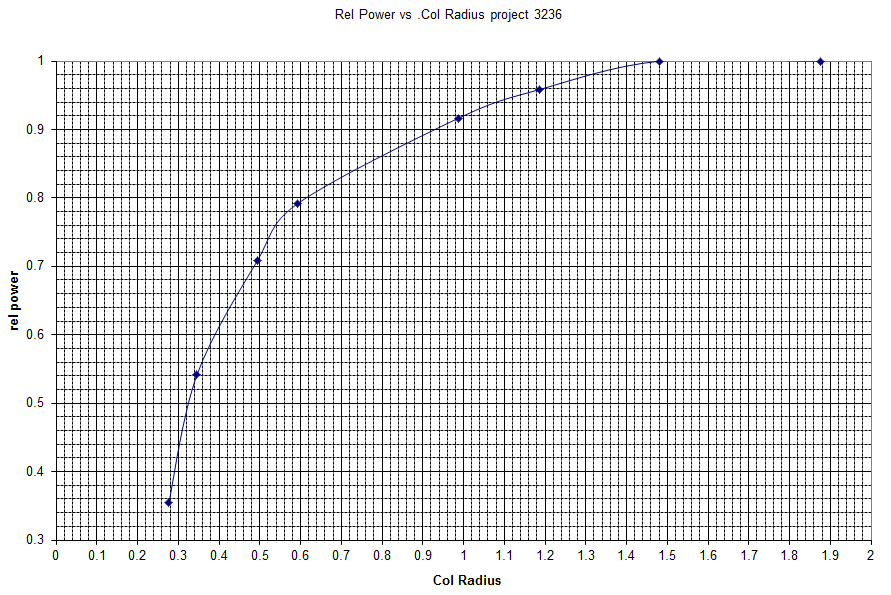 Collimation measurements of the system which show > 80% of the optical power within ± 0.7° 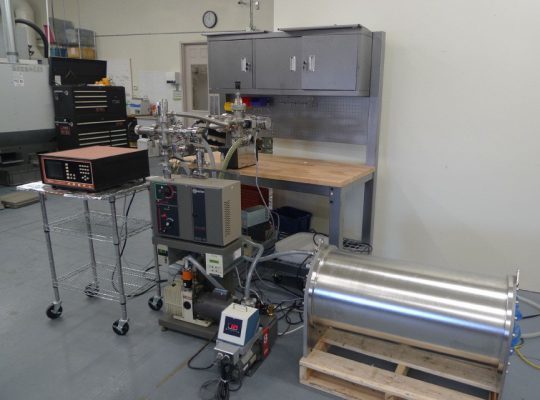 The solar simulator housing being monitored for leaks

The solar simulator housing was over pressured to 2 atm and monitored for 12 hours for any potential leaks.

Window dimensions were result of research and calculation. High quality pressure windows were sourced to manufacture the optical output window.

Below are the requirements of the end user for temperature maintenance of the system.

Lamp seals of the solar simulator had to be maintained below 230˚C. But traditional forced air cooling could not be performed when the solar simulator is hosted within a vacuum chamber.
Fresnel optical elements traditionally used with this type of simulator had to be maintained at temperatures below 80˚C.
The lamp envelope required some cooling which could only be done by passing air or gas over the lamp envelope.


Sciencetech engineers determined that the best approach was to build a pressure vessel to house the simulator and optics. The pressure vessel allowed cold liquid to be pumped into the chamber and routed to a series of radiators which performed heat transferring inside the chamber via forced air through the radiators. The anode and cathode of the lamp base was cooled with a water re-circulator filled with de-ionized water.


Since Sciencetech is committed to providing the best solutions to complex engineering problems, we specifically built a test chamber to perform these cooling experiments. We progressed through a series of failed prototypes and burnt-out lamps and power supplies before arriving at a successful cooling system.


The final solar simulator system was built and a series of tests were performed to prove capabilities of the housing to maintain required temperatures and vacuum compatibility. All optical design tests were conducted ahead of time to ensure the required optical power, spectral match, collimation angles and other specifications requested by the end-users were met.


The system went through an on-site acceptance testing procedure at the end-user’s facilities and was installed by Sciencetech’s service engineers.

Contact Us Today
Get more information or request a quote.
Email Us
Request Quote
Copyright © Sciencetech